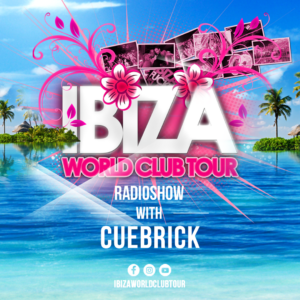 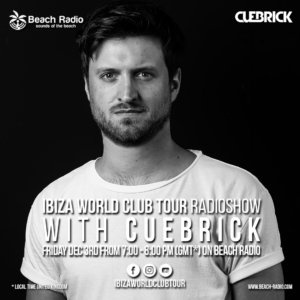 This week we welcome the DJ and producer Cuebrick with his guest mix on the Ibiza World Club Tour radio show.

Over the years, the German DJ and producer Cuebrick has positioned himself as one of the most sought-after acts in the European dance music scene. He’s steadily gaining attention in the industry as he releases track after track on major labels and imprints such as Spinnin Records, Maxximize, Smash The House, Revealed Recordings, Enhanced Recordings, Ultra Music, Mixmash, Armada Music, etc. While he delivers high-quality content and productions for his steadily growing fan base, Cuebrick also stands on banners next to scene heavyweights such as Dimitri Vegas & Like Mike, Hardwell, MartinGarrix, Tiesto, Armin van Buuren, Afrojack, Blasterjaxx, Nicky Romero, W&W, Mike Williams , Futuristic Polar Bears, Tritonal, Steve Aoki, Timmy Trumpet, Jay Hardway, The Chainsmokers & many more. Since his start as a sought-after tour artist, Cuebrick has been able to spread his unique mainstage performances on national stages such as Nature One, Mayday, Electric Love, Ruhr In Love and traveled to international destinations such as Singapore (SGP), Bangkok ( THA), Los Angeles (US), San Francisco (US). In addition, Cuebrick also works as a radio host on bigFM’s “nitroX” show, the largest radio program for electronic music in Germany, where he welcomes the most famous acts of the global electronic dance music scene. Cuebrick is also following his way up to the top of European dance music with his current releases “Squid Play”, a collab with Blasterjaxx and the single “So L.A.” which was created together with the artists BEAR, Jvzelle & Zach Sorge. We look forward to Cuebrick’s guest mix with which he will bring the festival feeling back.