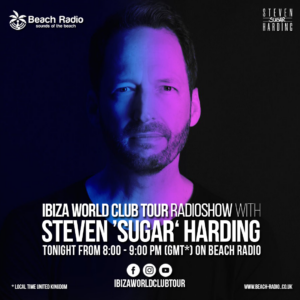 Steven ‘Sugar’ Harding is responsible for the guest mix on the current edition of the Ibiza World Club Tour radio show. Steven ‘Sugar’ Harding was the producer and creative mind behind the sound of DJ duo Milk & Sugar for 25 years. As one half of the globally successful house music act, Steven ‘Sugar’ Harding has been one of the most influential and successful DJ and producer personalities in Germany for over two decades. During this time he never tired of constantly evolving himself and his interpretation of house music, leaving a catalog of numerous club and chart hits for posterity along the way. Steven ‘Sugar’ Harding developed an early flair for what some would call the perfect club mix – songs with an intensity designed to boil over any venue. One of Milk & Sugar’s biggest hits, “Let The Sun Shine” (based on the 1969 5th Dimension evergreen), became a milestone in his career. First the track took Ibiza by storm, and then it hit the charts in many more countries – reaching number 1 on the US Billboard Dance chart and the top 20 on the UK pop charts. “Let The Sun Shine” is now a classic in the house music genre, so it’s no surprise it topped the dance charts again in 2021’s Purple Disco Machine remix. With his concise house sound, Steven has traveled to over 60 countries with Milk & Sugar and other projects and got the dance floors boiling in the hippest clubs in the world, as well as at countless events and festivals. Highlights include superclubs in Ibiza like Space, Pacha and Amnesia as well as Sirena and Green Valley in Brazil, but also the national mega events Mayday, Time Warp, Nature One as well as Sun, Moon and Stars. Steven’s role models, such as the US house greats David Morales, Tony Humphries, Frankie Knuckles and Dennis Ferrer, became important supporters over time, who – like numerous other well-known DJs from all over the world – supported the tracks he produced for Milk & Sugar played in their sets and carried them around the world. This year marks Steven ‘Sugar’ Harding’s solo career with a string of releases on his new Confection Music label. His first two singles “Running” and “You Know What It’s Like” underline his claim to continue to entertain the most demanding listeners with peak time floor fillers balanced down to the smallest detail. In the incredibly fast-paced and ever-changing world of the music business, Steven ‘Sugar Harding has managed to survive for 30 years now – by no means an insignificant achievement in this industry. His story is absolutely unique and he can proudly say that his name will forever be linked to the history of house music – and most likely in the future too. Steven ‘Sugar’ Harding is poised for many more exciting years to come and can now be heard on the Ibiza World Club Tour radio show!