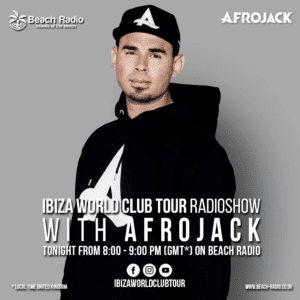 In the latest issue we welcome Dutchman Nick van der Wall aka Afrojack to the Ibiza World Club Tour radio show. As one of the most innovative and sought-after artists, Grammy Award-winning producer and DJ Afrojack continues to push boundaries that push music in bold new directions. Since breaking through with the multi-platinum single “Take Over Control,” Afrojack has applied his production skills to genre-defying tracks, laying the foundation for big hits for the likes of Beyoncé, Pitbull and Will. In recent years, Afrojack has been named one of the 50 most important people in EDM by Rolling Stone and included in Forbes’ 30 Under 30 music list. In 2010 he was one of the first DJs to secure a residency in Las Vegas and he continues to entertain global audiences as a sought-after headliner. Afrojack travels the world performing at the biggest clubs and festivals while producing new music with his label Wall Recordings. A milestone in 2020 was when “All Night” feat. Ally Brooke reached #1 on the US Dance Radio chart, amassing an impressive 40+ million streams to date. His discography features hit after hit created in collaboration with David Guetta, Fedde Le Grand, Yves V, Chico Rose, Wrabel and Steve Aoki, among others. We look forward to Afrojack’s guest mix on the Ibiza World Club Tour radio show.