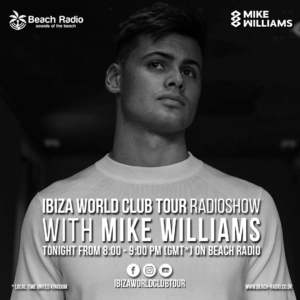 In the latest edition of the Ibiza World Club Tour radio show we present Dutch DJ and producer Mike Williams. Our guest started playing the piano at the age of 4 and his family suspected that a music career was in store for him. He bought his first DJ gear with his savings at the age of twelve and from that moment Mike was always behind the decks. His breakthrough came in 2017 with his hit “Feel Good”, a collaboration with none other than Felix Jaehn, skyrocketed on radio, playlists and streams. The song now has over 147 million streams on Spotify. Mike released the club banger “Lullaby” with R3hab (181 million streams) not long after his first success. “The Beat” (65 million) and “Wait Another Day” with Mesto (75 million) followed and also became huge hits. Piece by piece, Mike conquers the world with his incredible melodies, club bangers and catchy radio hits. For every new song Mike Williams begins, the piano is the solid start and foundation. His unmistakable sounds led him to the main stages of ULTRAS, Tomorrowland, Parookaville, World Club Dome and Mysteryland. Even during the pandemic, Mike Williams has always been behind his decks. He is currently touring through Asia, before that he was with the Winter Edition of Tommorowland, his tours take him to Taiwan, Nepal, China, across Europe and to the USA and Canada. When Mike Williams is not on the road, the down-to-earth Dutchman can be found in his studio in Hilversum. Because Mike is such a dedicated and ambitious artist and producer, the biggest names in the business such as Tiësto, Hardwell and R3hab to name a few love working with him and it has spawned numerous successful singles. Some of it will be heard in his guest mix for the Ibiza World Club Tour radio show.