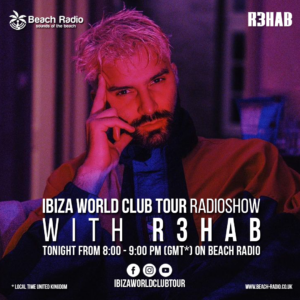 R3HAB is responsible for the driving beats in the latest edition of the Ibiza World Club Tour radio show. The Dutch DJ and producer with Moroccan roots, took his first steps in 2008 when he released the track “Mrkrstft” and it was presented by none other than HARDWELL. The single reached number 38 in the Dutch charts. From this point on, things continued successfully for R3HAB. He released one more track with HARDWELL and was noticed in 2010 for remixes for David Guetta and Bob Sinclar. Remixes for Tiësto, Lady Gaga, Calvin Harris, Katy Perry, Afrojack and Jennifer Lopez followed in 2011. And R3HAB signed a record deal with WALL Recordings, Afrojack’s label, on which he released numerous tracks. In 2013 he switched to SPINNIN’ Records, where the track “Revolution” was released in collaboration with the Australian DJ duo NERVO, Ummet Ozcan. The song made the UK TOP 40 and reached #1 on the Beatport charts. In the years that followed, R3HAB released numerous singles and brought Timmy Trumpet, Vini Vici, Icona Pop, MOTI, Krewalla, Burns and Skytech, Sigala and Lukas Graham to the studio for Collab’s. His skills as a remixer were also in demand, so R3HAB made commissions for Rihanna, Zara Larsson, DJ Sneak & Justin Bieber, Axwell Λ Ingrosso, John Legend, Diplo and Marshmello, even Rammstein and Helene Frischer knocked on his studio door. And his productions are also impressive in numbers, 30 gold and platinum awards in 23 countries, 21 million monthly listeners on Spotify and number 12 in the DJ Mag Top 100 voting in 2021. In addition, there is a sold-out “All Around The World Tour” in the 2019 and gigs at EDC, Ultra Music Festival, Tomorrowland and Coachella Festival. We look forward to R3HAB’s guest mix on the Ibiza World Club Tour radio show, in which he has summarized many of his hits for us.