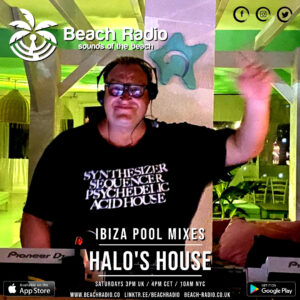 Martin brings us a collective of laid back tunes and anthems from the white Isle !!

Martin has eclectic musical taste drawing from his varied past……you can find him anywhere enjoying the music -from the dance floor of Hi in Ibiza to the mosh pit at a Foo Fighters stadium gig Having first played vinyl in one of Sunderlands largest clubs (The Blue Monkey) in the 80’s, Chicago House gave him his lifelong love of all things house, leading to playing venues & events all over North East England. A serious knee injury which finished his rugby career & a relationship break up led to an early season solo rehab holiday in Ibiza….where he was asked to stay & help by Club 18-30 to help…..which of course he did….. the details & names have been withheld to protect the innocent !!! Meeting his future wife at the very end of that season, he immediately on return to UK relocated just south of London to be with her, built the non music career, had 3 children & due to the continued knee damage never reentered the DJ booth Martin never returned to Ibiza from that summer in 1993 until 2010, no social media, people relocating all over the world etc meant connections just drifted The return to Ibiza was prompted by a series of events you couldn’t predict in 2007, moving the family to Durham from the south, serious invasive brain surgery to remove something nasty from in there (they said they did find some brain too!!) & divorce,  mixed with the start of Facebook (my metal skull doesn’t set off airport scanners… everybody asks!!) Previous Ibiza connections started reconnecting, Encouraging a return, & Martins 2 youngest kids begged him to take them to show them the island & meet his friends That trip reconnected Martins love of the island, which started a cycle of 3 or 4 visits a year either with the children, with a girlfriend or solo trips, these holidays have evolved to elongated summer stays Although Martin has kept his hand in at home with his decks, he was coaxed out of 28 years of retirement in summer 2021, playing at the famous Rock Bar in Ibiza town Marina & a live streamed event from the amazing Beach Star Hotel back to back with Kavita (the knee suffered for days after both times!!) Martin is honoured to join the Beach Radio team & excited by the growth we will see in 2022….. watch this space for regular “House of Halo” mixes & shows