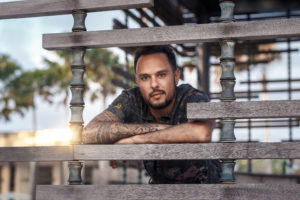 Whenever its behind the turntables or in the Studio, Rafa likes versatile, groove percussions, jazzy, blues, world rhythms, flavours with electronic infused tracks with room for deep elements and melody’s as well as pure dencefloor work. His style is warm and subtle at the same time very energetic.

Originally from Brazil with an Italian passport, Lambert first travelled to South East Asia to Bali in 2007 looking for perfect waves and finally found his home after years experimenting with different music styles. 1980 Born Rafa has today a huge musical background which he uses for his productions as well for his Dj-Sets: They are always unique.

By this point he’d already dabbled into and was collecting records, so it didn’t take him long to break into the island’s nascent club circuit, holding down residencies at several spots in Bukit and clubs in semyniak like Ulucliff House, El Kabron, Mint Club, Jenja, Alila Semyniak, Rock Bar, Metis, Karma Kandara Beach club, Sunday’s Beach Club Like his peers—would spin ten-hour sets, playing anything and everything he could get his hands on.

Lambert grew up making his own instruments, like bamboo transversal Flutes, Djambes, Berimbau, Kalimbas, in his native Brazil. He started touring Brazilian venues at age 17 as a flutist and percussionist, with traditional Brazilian bands, with an eye towards bossa nova and samba, making his summer money at the bars and beach clubs along the Brazilian coastline. He started jamming with a Friend Dj in a stylish dub-reggae outfit Dub From Mars and fusing in multiple instruments into their performances. During university, he started as a songwriter and began publishing music. After a few years touring in Australia and working with various groups and artists like Andrew Winter, Esh Grunwald, and Xavier Rudd, both in the studio and on the stage. He also studied with aboriginal didgeridoo masters in both the playing and crafting of these magical instruments.

Organized many beach DJ party as one of them recently an charity fundraiser to aid beleaguered beachside restaurant owners after cataclysmic fire, in Balangan Beach, Bukit, Bali.

Recently venues been playing in Bali: