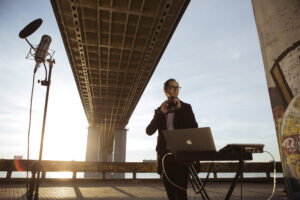 Pavel Khvaleev – a music producer since 15 years (ex-member of the project Moonbeam) and a director of independent films which were released on Netflix and Amazon Prime. As a member of Moonbeam project, Pavel was repeatedly entered the DJ Magazine’s annual list of the world’s best DJs TOP 100. Following their 2016 disbanding, Pavel Khvaleev continued solo and for his second solo album “Sonder”, he worked with a couple of international singers/bands and also gained quite great achievements, such as holding the No1 position on the Belgium iTunes electronic chart for 24 weeks and overall Top 10 positions in Russia, on iTunes. In 2019 Pavel Khvaleev won the Red Bull Music Kitchen international competition.