Joey Negro is the most well known pseudonym of master British DJ/producer/remixer Dave Lee.
Joey Negro has been producing with love for close to three decades. Arguably house music’s major proponent of soulful, disco-tinged, vocal records and without question instrumental is its development and popularisation, no-one treats a loop, groove or hook with as much care and attention as Joey Negro.

Joey Negro is the most well-known pseudonym of master British DJ, producer and remixer Dave Lee. Under a plethora of other monikers including Akabu, Doug Willis, The Sunburst Band, Sessomatto, and Z Factor, Dave was one of the first artists to incorporate disco samples in house music when he began his production career in 1988. Indeed, he was in the studio making credible and outstanding British house music when many luminaries around him were still busy getting to grips with their decks. Little has changed since then and Dave is still widely regarded as one of the most credible and in-demand artists on the global scene.

Intrinsically linked with the birth of disco and house in the UK, Lee set up the dance music division of Rough Trade, Demix and through this link, he began working with the Rhythm King label, which had had a number of hits with acts like Bomb The Bass, S-Express, Cookie Crew and Beatmasters. This experience and intimacy with other leading house labels led to Lee establishing his own imprint, Republic Records in 1988. Republic was one of the UK’s first soulful house labels releasing classics such as Phase II ‘Reachin’ and Turntable Orchestra ‘You’re Gonna Miss Me’. And after producing several acid house favourites – including ‘1666’ and ‘Get Acidic – in 1989, Republic then put out Lee’s most widely-recognised work during this time: ‘Forever Together’, released under his Raven Maize alter ego in partnership with Mike Cheal and Mark Ryder.

Lee’s unashamed love of disco began decades ago via an unusual source. “I was 13 when I first heard “Boogie Nights” by Heatwave on a children’s TV show called Multicoloured SwapShop and it started a love affair with disco music that has lasted all my life. Despite being derided in the media the best disco is undoubtedly some of the finest music ever created.

“There’s so much to love in disco, be it the funky live bass lines, the amazing level of musicianship, the wonderful orchestration and arrangements, the warm organic sound, the way the tracks build and go somewhere and that’s before we even get to the incredible vocals and songs. 40 years later I still hear plenty of sample tracks based around disco records but what I don’t come across much of is actual original new material made to the disco blueprint. When I DJ I don’t want to play a whole set of old stuff or remixes of classics, and similarly as an artist it’s important to write, produce and release some totally new songs.”

Joey Negro, as an entity, was born in 1990 with the release of ‘Do It Believe It’ on US cult house label Nu Groove. The track was a breakthrough success and was followed by ‘Do What You Feel’, which was released on his second label and successor to Republic, Z Records. ‘Do What You Feel’ eventually crossed from a club hit to a top 40 pop hit. Another Top 40 track followed with ‘Love Fantasy’ and an album Universe of Love soon after that.

Throughout the 90s and 00s right up until today, Dave Lee has produced an astonishing number of records and remixes under various names and for some of the world’s greatest artists, including Roxy Music, Bob Marley, Roisin Murphy, Pet Shops Boys, Diana Ross, Grace Jones, Lionel Richie, Mariah Carey and Tears For Fears. Alongside the likes of Nile Rodgers, Daft Punk, Jamiroquai and Dimitri From Paris, he’s one of the few artists to have been keeping the disco fire burning fiercely into the 21st century.

In 1997, Lee met Taka Boom, Chaka Khan’s sister, when she relocated to the UK, and the pair collaborated on ‘Can’t Get High Without U’, which after release on Lee’s ZR label was licensed to Erick Morillo’s Subliminal Records. That same year Lee’s new project The Sunburst Band released their debut EP, ‘Sunburn’, which included ‘Garden Of Love’, one of the band’s most successful songs. Eschewing programmed beats, Lee opted to gather many of the session musicians with whom he’d worked over the years – among them Viv Hope-Scott, Jessica Lauren and Tony Remy – to record the first album, Here Comes The Sunburst Band, in what was a conscious departure from electronic music. Three further Sunburst Band albums followed, all of which employed a similar approach of live instrumentation.

One of Lee’s most notable pop successes came when was approached by boy band Take That’s label with a view to working together. Although the Dan Hartman song ‘Relight My Fire’ had never been a hit in the UK, it had become a popular club track on the house music scene, so at Lee’s suggestion they covered it, with Lulu also being brought in to take the cameo role that Loleatta Holloway had performed on the original.

Lee’s first solo brush with the higher echelons of the Top 40 came in 1999 when TV series Ibiza Uncovered used a portion of Z Factor’s ‘Gotta Keep Pushin’ as its theme. Lee reworked the song, with Taka Boom on vocals, and re-released it as ‘Must Be The Music’, which eventually peaked at No.8 on the UK singles chart. The following year, Lee scored an unlikely hit with an underground smash called ‘American Booty’, sampling two Thomas Newman pieces (‘Dead Already’ and ‘American Beauty/Paper Bag’) from the soundtrack for the film American Beauty. It was eventually reworked with added vocals from Swati Nektar using the Jakatta alias, delivering the biggest hit of Lee’s career, peaking at No.3, with the following Jakatta album going on to break the top 10 in the albums chart.

Not content with producing music, Lee is also an avid collector and compiler with many a compilation under his belt. These include ‘Joey Negro In The House’ released on Defected, ‘Disco Spectrum’ 1 – 3 (BBE), Kings of Disco (with Dimitri From Paris) ‘Jumpin’ 1 & 2, ‘Disco (Not Disco)’ 1 & 2, Southport Weekender Volume 1, ‘Nite:Life’ and ‘Back In The Box’ releases on NRK plus his ‘The Trip’ and ‘Lust: Art & Soul’. He has also compiled a number of highly regarded genre specific compilations on the Z Records label, sometimes put together with long time digger friend Sean P. ‘Remixed With Love’, ‘Destination Boogie’, ‘Supafunkanova (Vol 1&2)’ the ‘Soul of Disco’ (Vol.1-3) albums, ‘Back Street Brit Funk’, ‘GoGo Get Down’ ‘Italo House’, ‘90’s House & Garage’, ‘Electro’, ‘Le Freak’ – all of which continue to further cement him as one of the foremost authorities on this music old and new.

2016’s Remixed With Love 2 – a follow-up to the hugely popular first compilation, and which included exclusive reworks of Robert Palmer, Grace Jones and Christopher Cross all from the original master tapes – proved that JN’s powers were as sharp as ever, with the collection going on to be Traxsource’s best-selling of 2016, reaching top 30 on iTunes album chart, and also being named DJ Mag’s compilation of the year.

2017 saw the release of Produced With Love: only the second ever Joey Negro album to be released, and the first for more than 20 years. As the electronic music scene threatens to be overrun with faceless, bland and forgettable productions, Produced With Love proved that dance music with character still exists. And rather than rely on sampling older records, the overwhelming majority of music was newly recorded: a real rarity when it comes to modern disco and indicative of the level of detail involved in the project.

When it comes to making an album, Lee admits that he’s his own harshest critic, with tracks re-worked, tweaked, honed and sometimes scrapped altogether in order to deliver the best he’s capable of. “I judge my music against the stuff I liked the most, such as Chic, Patrick Adams, Rinder & Lewis, Mario Malavasi. I’ve noticed some people I’ve gotten into musical conversations with seem to be constantly looking for “new” sounds and stuff that’s never been done before. I get that, of course we all like to hear something fresh, but the bottom line for me is “is it any good?”. I’m not really a weird reversed noise over a distorted drum beat kinda guy, even if it is considered groundbreaking. I’m more into crafted, well delivered songs and don’t really care if it was recorded yesterday or 40 years ago, the bottom line is that I enjoy listening to it.”

Unfortunately between starting and finishing the project the supremely talented Diane Charlemagne, the singer and songwriter with whom Lee co-wrote many songs with over last 10 years very sadly passed away. “We had a great working relationship, which was both fun and honest. Most of my final collaborations with Diane, ‘Overnight Sensation’, ‘Prove That You’re Feeling Me’ and the partly re-written remake of ‘Must Be The Music’ are on this album.”

“When making an album from scratch you begin with nothing but a few ideas floating around in your head” says Lee of the process. “All the music, melodies and lyrics need to be written, the instruments and vocals recorded (often re-written and re-recorded) before you even get to the mixing point. Sometimes it is a daunting amount of work and as with any big project you convince yourself at points that it’s not any good. However, as a producer/artist, you can’t beat the buzz when a song finally comes together and you feel you’ve created something special that didn’t exist before.”

Further album highlights include a completely remade Must Be The Music’ (one of Joey Negro’s best-known records), which is utterly transformed from its previous incarnation, whilst things get both dubby and jazzy on the Arthur Russell-evoking ‘Distorting Space Time’.

2018 saw Z Records release the long awaited follow up to Backstreet Brit Funk with Volume 2 showcasing more from the underground Brit Funk scene of the late 70’s and early 80’s. Vol.2 was released on double CD and Gatefold Double vinyl Part One and Part Two.

Still going as strong as ever after nearly three decades in the game, the Joey Negro discography is undoubtedly one of the most impressive in dance music, while his deep understanding as a selector of all things disco and house on the dancefloor have ensured his status as one of the most important dance music artists of all time. 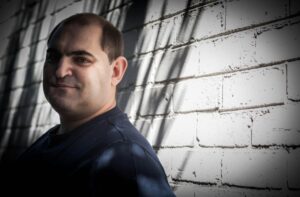 An Australian of Italian descent based in the UK, Anthony Pappa is a true internationalist, with a self-imposed mission to share his music with people all around the world. And since gracing the cover of DJ Magazine in 2000 as part of the celebrated “N.. Described as “The DJs, DJ” Anthony Pappa truly is a […] 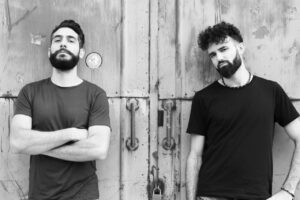 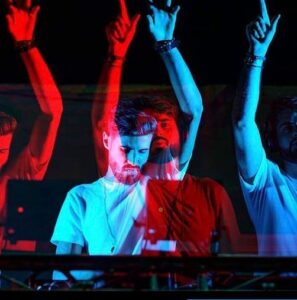