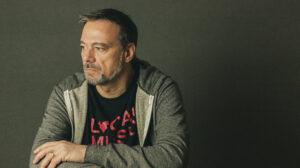 Alain M. proudly represents the 613. His weekly podcast, Ottawa Prog Vibes, consistently charts on Mixcloud’s Canadian Top 100 and has a loyal, global listenership. “I want Ottawa to be the first beneficiary of what I’m doing. For me it’s always been about making sure people know that the sound is from here, it’s part of the sound of our city, and part of what you can get in our city. I want people from other places to come to Ottawa and experience my sound as part of what makes Ottawa worth visiting.” Inspired by prog rock, early Dutch techno, 1990’s trance and New York house, his tastes have evolved towards progressive house, with a particular fondness for Argentinian productions. Over his 25+ years as a DJ, Alain has cultivated a signature melodic, danceable, and thoughtful style with enough surprises to keep even the most devout listeners on their toes. His live events, organized only a few times annually, are a hypotonic, transformational experience for attendees, putting the Nation’s Capital on the map for electronic music. Even while providing a sought-after, niche experience, Alain intrinsically understands the value of an intelligent radius, making him a refreshingly strategic act to booking agents. He has organized and collaborated in a number of club events including Levitar, Sunday Meet & Beat, Ottawa Prog Nights and unique, COVID-safe Sit-Down Sessions, attracting a thoughtful crowd who stay mesmerized by his melodic, danceable sets, always peppered with delightfully unexpected sonic elements. He continues working on live and broadcast projects through the difficult COVID lockdowns, always as permitted by applicable health restrictions. Alain M.’s work attracts fans of DJ’s like Hernan Cattaneo, Sharam, Dubfire, Nick Warren, Eelke Kleijn, Sebastian Busto, Jody Wisternoff, Guy Mantzur, Guy J., Ezequiel Arias, Trevor Walker, Martin Villeneuve, Max Graham, Simply City, Daniel Camarillo and Frangellico.

Alain M. podcasts, on a weekly basis since May 2019, a one-hour selection of carefully selected and skilfully mixed progressive house tracks from around the world. The podcast, now a known entity in Canadian electronica, is Ottawa Prog Vibes. The podcast has grown to also include, every second week, guest mixes by national and international DJ’s. The roster of national DJ’s is selected to prioritize and showcase Ottawa-based DJ’s who are working tirelessly to put our city on the global electronic music map. International guests are chosen among the rising and most promising proponents of the progressive genre. An offshoot series, called Mellow Prog Vibes, is released occasionally and focuses on more chill vibes, slightly more downtempo, to create a more relaxed vibe. The episode covers have, as a backdrop, the swirling lines that remind the eye of a spinning vinyl record. The original covers also had, in place of the record’s label, the candy-red O symbol of Ottawa’s metro stations – a familiar sight on the streets of Canada’s capital city. More recent covers have either Alain M.’s wordmark or the name, photo, city and flag of the guest DJ. Ottawa Prog Vibes has been charting among Mixcloud’s Canadian Top 100 Electronica shows for quite some time, reaching into the top-20 range a few times.